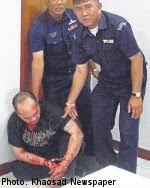 Ang Beng Bee tried to kill himself after he was arrested.

A SINGAPOREAN man went berserk and tried to kill himself by cutting his wrists and throat with a razor after he was arrested by Thai officials for having over 4,000 ecstasy pills, Thai online news MCOT said yesterday.

Ang Beng Bee, 46, was caught at a Thai-Malaysian border checkpoint in the Sadao district of Songkhla province during a random check. Thai customs officers found 4,384 ecstasy pills, 1g of crystal methamphetamine or "Ice" and five nimetazepam pills, a hypnotic drug, in his luggage.

Their total street value: S$152,000. Ang, who was treated at Sadao Hospital, said he had travelled from Johor to sell the drugs in Sadao and Hat Yai.

It's not known how Ang, who speaks fluent Thai, came in possession of the weapon, Pattaya Daily News reported. He may have concealed it on him, the report said.
at 1:22 PM 5 comments:

Duo saved from the gallows

SINGAPORE - The Court of Appeal clarified yesterday the scope of a criminal law provision enacted 138 years ago. And the court's interpretation of the meaning of common intention has saved the lives of two men headed for the gallows.

Daniel Vijay Katherasan and Christopher Samson Anpalagan, both 27, had been convicted of murder. But a 128-page written judgment from the highest court in the land has now found them guilty of robbery with hurt.

They were in a group of three who had robbed a lorry loaded with 2,700 mobile phones, worth $1.3 million, in May 2006. During the robbery along Changi Coast Road, Nakamuthu Balakrishnan, 51, bashed the lorry driver, Mr Wan Cheon Kem, with a baseball bat.

The Appellate Court ruled that Katherasan and Anpalagan shared no common intention with Balakrishnan to kill Mr Wan, nor did the duo intend to knock the latter unconscious.

While they knew violence would be necessary to carry out the robbery, Chief Justice Chan Sek Keong, who delivered the judgment, said knowledge was not the same as intention.

"In short, there was no finding of a common intention among the Appellants to cause Wan's death or inflict any specific injury on Wan," he wrote.

In setting out a non-exhaustive list of various scenarios, the Court explained that an offender can only be said to have committed a crime with common intention if he had the same intention to commit the act done by the actual perpetrator.

Where murder is concerned, the Court ruled there must be a common intention to cause, specifically, an injury leading to the offence.

Katherasan and Anpalagan will be sentenced at a later date.

The duo face a jail term of between five and 20 years and at least 12 strokes of the cane.

Vui Kong gets to see his next birthday 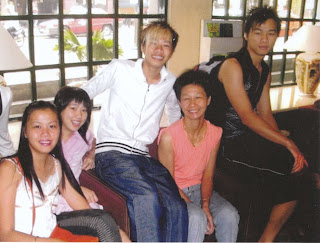 In a court ruling on 31 Aug, Vui Kong gets another stay of execution from the High Court when it ruled that the date for appeal of the High Court's judgement on judicial review will be on the week commencing from 17 Jan 2011.

Vui Kong, who will be 23 in January next year, will have spent almost 4 years in prison after his incarceration.

The average waiting time for convicts in death row in recent years have reduced dramatically as the court processes become more efficient.

The judges seem to have a compassionate streak to give Vui Kong's lawyer another 4 months to prepare and Vui Kong another 4 months to continue his daily ritual of prayers and maintain a tiny sliver of hope that one day, the Singapore President can grant him clemency.

Before passing the judgement, trial judge Justice Choo Han Teck summoned both the defence and presecution into chamber and asked the prosecution if they would consider reducing the charge given the relatively young age of the drug offender, who was not even 19 at the age of the offence. The prosecution declined and the death sentence was handed to Vui Kong.

On 14th May, the Court of Appeal duly rejected Vui Kong's first appeal. But it acknowledged that the mandatory death sentence is considered a cruel, degrading and inhuman punishment.

The judges seem to favour giving Vui Kong a second chance, but they are unable to because of the lack of discretion due to the mandatory nature of the death penalty applicable to drug traffickers.

This is unfortunate, because day in and day out these judges see criminals, some sentenced to death, others not. High court judges should be given the powers to decide whether a person has committed a crime so heinous that he/she deserves the death sentence.

Malaysia has had a minister speaking up about abolishing the death penalty recently, when would it be Singapore's turn?
Save Vui Kong: Vui Kong gets to see his next birthday
at 3:29 AM 1 comment: