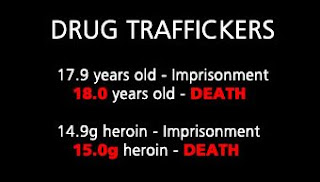 By la nausée (http://etrepoursoi.wordpress.com)
While I was searching Lawnet for death penalty cases last December (preliminary statistics here), I also happened upon certain cases involving (to put it mildly) an interesting use of the Public Prosecutor’s discretion as regards the Misuse of Drugs Act.
Before this, I’d only known through hearsay that the prosecution occasionally presses a non-capital charge against a drug trafficker even though the actual quantity involved would have attracted the mandatory death penalty. (Alex Au mentions this practice in his article, in the second blurb in the right column.) So, even if the accused was found with 30g of heroin, he is charged with trafficking “not less than 14.99g”.
Of course, the prosecutorial discretion may be exercised in other ways to avoid the mandatory death penalty. For example, by pressing a charge of possession instead. Indeed, that’s been done sometimes. But this may potentially result in a manifestly inadequate penalty — even though the maximum sentence of 10 years’ jail for possession of a controlled drug is itself nothing to scoff at.
One might also say that the prosecution is simply exercising its discretion to charge for 14.99g of the heroin, but not the other 15.01g. The charges actually brought need not take into account every fact which occurred, or every act by the accused.
Compare the case where X breaks into Y’s house, kills Y and makes off with Y’s possessions. Most people would agree that the prosecution is entitled to charge X only for murder, without also charging him for criminal trespass or burglary. Thus, during X’s trial, the fact that X entered Y’s house illegally and stole some things becomes largely irrelevant. One might say that the “14.99g” case is not all that different — the prosecution is simply proceeding on certain facts, while ignoring others.
But here are the “14.99g” cases I’ve found between 1998 to 2009 (I may have missed a few):
The death penalty and the “14.99g” charge